On July 1, 2019, OPEIU Local 2 filed its third Unfair Labor Practice (ULP) against the AFL-CIO. In the course of contract negotiations, we believe that the AFL-CIO has:

Our goal is to have employers sit down with workers and bargain in good faith. But when you have companies that, instead of treating us as assets to be invested in, view us as costs to be cut, there’s going to be conflict.
AFL-CIO President Richard Trumka, 2016

OPEIU Local 2 and the AFL-CIO have been in contract negotiations since May 23, 2018. To date, the OPEIU Local 2 bargaining unit has tentatively agreed to a wage freeze for three more years. We also tentatively agreed to eliminating layoff protections, surplusing and return rights; and reducing long term disability protections and vacation banking. We also agreed to explore changes to the AFL-CIO’s healthcare and staff retirement plans. Finally, we agreed to up to 12 days of furloughs in years 3 and 4 of the CBA after providing financial justification to the Union.

The sticking point? The AFL-CIO insists on placing furloughs under Management's Rights. The AFL-CIO also wants to be able to implement furloughs at any time, on any bargaining unit member, for any duration, without (1) providing justification, (2) shared sacrifice, or (3) a drop-dead date (i.e. in perpetuity). We believe that agreeing to the above furlough terms will not only hurt us but every union member whose employer looks to the AFL-CIO to set the standard in contracts.

​Since we will not agree to the above terms, the AFL-CIO illegally imposed its contract (see October 9, 2018) and began retaliating against union members (see March 6, 2019).

​We will continue to encourage the AFL-CIO to practices what it preaches.

Stop playing politics with our lives. It’s unnecessary and it has to end.
AFL-CIO Secretary-Treasurer Liz Shuler at a rally protesting the furlough of government employees, 01/19/19

March 6, 2019: OPEIU Local 2 files a second ULP against the AFL-CIO. Charges against the AFL-CIO include: (1) unilaterally changed terms and conditions of the bargaining unit driver and other unit employees without notice and bargaining with OPEIU Local 2; (b) discriminated in the assignment of work because OPEIU Local 2 bargaining unit members exercised their rights under Section 7 under the Act; (c) imposed terms seeking unlimited managerial discretion over workforce numbers, hours and days of operations without a good-faith impasse in negotiations; and (d) since September 11, 2018, failed and refused to provide relevant collective bargaining information requested by OPEIU Local 2. View ULP charge here.

February 11, 2019: OPEIU Local 2 bargaining unit members sign and send a letter telling a particular AFL-CIO leader to stop retaliating against one of the unit's members for standing with his union. The AFL-CIO does not respond.

January 17, 2019: The bargaining unit rejects AFL-CIO's proposal. OPEIU Local 2 requests that management return to negotiations. Management requests the vote count and says that it is available "to talk."

When workers sit down across the table from our employers and bargain, we bring home higher wages, have greater access to health care and a pension and are more likely to be safe on the job. Most importantly, workers who bargain collectively have a voice, a say in the terms and conditions of work.
AFL-CIO President Richard Trumka, 2016

​December 10, 2018: OPEIU Local 2 refiles the charge with the NLRB against the AFL-CIO. View ULP charge here.

October 31, 2018: The bargaining unit agrees not to go on strike before November 6th in order not to compromise AFL-CIO's campaign to elect pro-labor candidates on November 6th.

October 23 - November 8, 2018: OPEIU Local 2 and AFL-CIO go through mediation. Talks break down around AFL-CIO's insistence that it should have the ability to unilaterally impose furloughs without negotiating with the union. 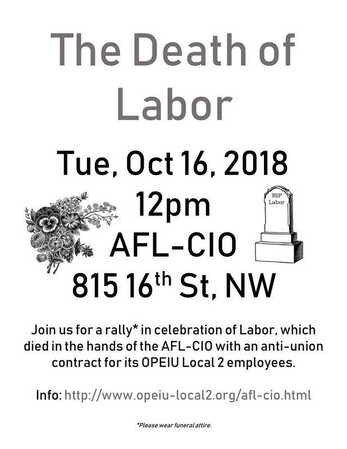 October 11, 2018: The Guild presents to AFL-CIO management a petition of solidarity from the Guild and supporters.
​
We, the over 500 undersigned, ask AFL-CIO management to return to bargaining with OPEIU Local 2 in good faith. As a labor movement, we value a fair return on our work, a respectful work environment, and dignity on the job. These core values should be the foundation of a contract with OPEIU Local 2.

Affiliate needs and the political environment are always in flux, and we understand that the greater union movement, collectively, is experiencing challenging times. It has always been the AFL-CIO’s duty to be responsive to these needs, but we believe this can be done without compromising our values.
​
Return to bargaining with OPEIU Local 2 to reach a contract that represents the collective values of the labor movement."
Note: Due to reports of retaliation by the AFL-CIO, we have removed the petition. Thank you for your support!
October 10, 2018: Rally. We thank all of our allies who came out and showed solidarity with us.

​October 9, 2018: The bargaining unit votes unanimously to give strike authorization to OPEIU Local 2.

​October 8, 2018: AFL-CIO management begins imposing its LBFO, an anti-union contract, on its employees. The LBFO: ​The above is in addition to likely near-future cuts to healthcare insurance and the Staff Retirement Plan (i.e. pension plan).

It's so apparent that they don't want us here.
AFL-CIO employee and OPEIU Local 2 member

October 4, 2018: The Guild, which represents more than 100 employees at the AFL-CIO, expressed its solidarity with OPEIU Local 2 members. In a letter sent to management, the Guild stated,

The Guild is in full support and will honor any concerted activity demonstrated by OPEIU Local 2 including a picket line whether real or virtual.

As you know, the National Labor Relations Act (NLRA) shields union, nonunion, nonsupervisory employees’ decision to honor a picket line as protected concerted activity. Any discipline for an employee’s refusal to cross a picket line will be deemed a violation of the NLRA and an unfair labor practice. Further, if the AFL-CIO management were to pressure, let alone discipline, a Guild employee to cross the line – either physically do so or virtually do so by demanding that she/he perform work, we believe that would be improper and potentially an Unfair Labor Practice.

In addition, if the AFL-CIO decides to close the building it is the Guild’s position that all bargaining unit employee, headquarters and field, be should be paid accordingly as it it management’s choice.

We thank the Guild members, our coworkers and friends, who stand in solidarity with us. We cannot thank you enough.

May 23, 2018: Contract negotiations begin between the AFL-CIO and OPEIU Local 2. Management pushes several proposals that contradict its mission to "work tirelessly to improve the lives of working people." Simply put, they are anti-union.

The AFL-CIO is a federation of 55 national and international unions ("affiliates") that represent 12.5 million working men and women. OPEIU Local 2 represents 7,000+ members in 100+ workplaces ("shops") in Washington, DC; Maryland; and Virginia. 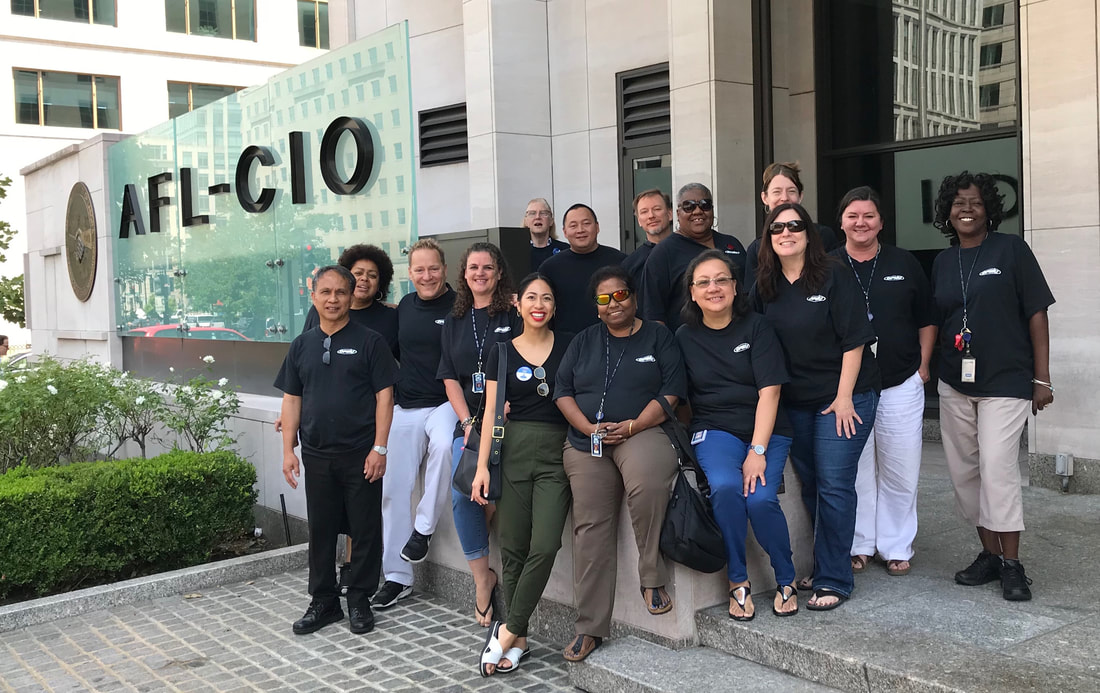 We call on union members everywhere to pressure the House of Labor from being the House of Hypocrisy.
Have questions or want to know how to support us? Call or email our staff representative, Jessica Maiorca, and ask how you can help: (240) 381-7579 or jmaiorca@opeiu-local2.org.

Brothers and sisters, the status quo is easy. Do nothing and you get nothing. You stay the same. It's the fight that's hard. That's what working people are after right now. Because we're the ones hurt most by the status quo.
AFL-CIO President Richard Trumka, 01/18/19